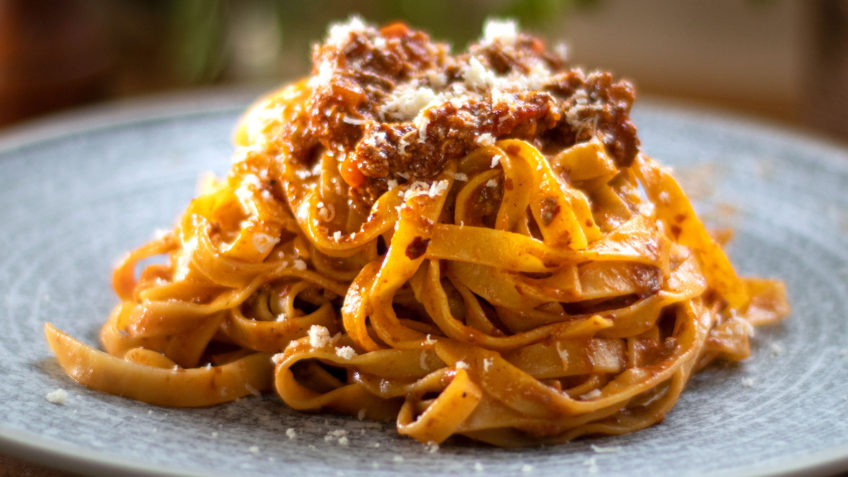 Bolognese sauce or Ragu alla Bolognese, is an Italian meat-based sauce for pasta which originated in Bologna in Northern Italy. Also known as Bolognese Ragu. This version is the closest thing to being the authentic recipe, however there can still be many variations. I don’t think there truly is an authentic version, but this is so close! Some use butter, others olive oil. For Ragu, I personally prefer olive oil. Some also add cream at the end, I don’t think it needs it, the milk does the job.

The secret of course is in the sauce, it has to be cooked for a long time, the longer the better. This breaks down the meat fibres which thickens and intensifies the sauce. In the days they used to cook this 5 to 6 hours as meat was tough. Today 2 to 3 hours is plenty. Traditionally the meat is not minced but chopped using a knife. If you don’t have pancetta, you could use pork mince also. Some parts of Italy may also use butter instead of olive oil, I prefer virgin olive oil for this. Milk is also added towards the end of the cooking process, to dampen he acidy of the tomato. Cream is an optional extra, and usually used for dryer style eggless pasta.

Now I know, spaghetti Bolognese sounds like an authentic Italian dish, but in fact it’s never seen in Bologna. In fact, you will never find it in Italy or at least I certainly haven’t. You will however find it in Europe, US, Australia, and some other countries. It’s also known as spag bowl, which is a terrible name, so please don’t ever use the name unless you’re a young teenager!

Always cook pasta al dente. (should be slightly firm when you bite into it. (br) (br) You can also add half a cup of cream towards the end of cooking time. (br) (br) Adding the salt to the water after it boils speeds up the boiling process and won't affect the flavour. (br) (br) Always heat up your serving plates as pasta cools down fast.(br)