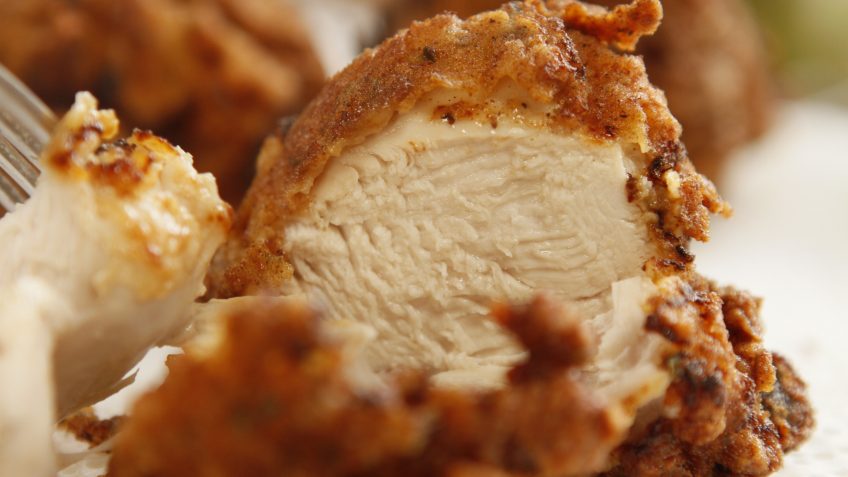 Is this the best KFC copycat recipe or the real one, you be the judge!

The closest fried chicken recipe that I’ve found to the real deal, could it really be true?

A sheet of paper with the hand written ingredients are supposedly Colonel Sanders’ secret herbs and spices. Fact or fiction, I don’t know but as Chef, I thought I’d do the taste test. I got hold of a copy of this secret sheet and made a video and recipe from it.

There are of course other factors at play, such as pressurized deep fryers which most of us don’t own. Plus brining your chicken in salted buttermilk will always render a more succulent juicy chicken.

First I had to drive to KFC and get the real deal.  Somehow I ended up in Hungry Jacks drive through, same carpark as the competitors what’s the deal?  Yes that’s correct, being a Chef I don’t usually buy junk food, so I’m out of my league, but as a kid, I did grow up with KFC and always looked forward to it when my family brought back that giant bucket!  It was indeed a special occasion highlight!

Now back to the recipe,  so I’ve got my real KFC pieces and I’m back home.  Of course the chicken got a little cold, I tasted it once from the box and then I did have to reheat it in my oven once my version was made. Reheating the KFC made it  crispier which is not exactly how it was purchased.  When buying any takeaway cardboard box,  there will always be steam from the hot food that softens any fried crispy food.  So here’s a tip for you, if at home, always reheat in oven to get that crisp back!

Please understand that the purpose of this video is purely to see how close these herbs and spices flavour is, and not so much about the texture.  I did use egg whites instead of whole eggs as whites are always crispier, this is to subsidise the fact that most people don’t own deep frying pressure cookers.

So see the video for yourself, how to make what I feel is, if not the original, the closest KFC recipe ever. The recipe measurements were hard to read and looked like tablespoons, however it now appears they were teaspoons.  I therefore altered the recipe to teaspoons.  I also believe that MSG is missing from this recipe and if you add that ingredient, it will be identical.  Let me know what you thought of the taste once you’ve tried, I’d love to know!

Thanks and good luck!   Feel free to leave comments on the YouTube video.

This recipe seems a lot stronger in flavour than the real KFC (see video above). You can always add an additional cup of flour or two to the mix bringing it closer to the real deal. I personally prefer it stronger, as per this recipe. Seems more like the old fashion KFC recipe. Try it first on a few fried chicken pieces, if it's too strong, it's always easier to add the additional flour to the mix later. Also if you marinate your chicken with a little salt and butter milk overnight, you will get a juicier and more tender meat. Some suggest that MSG is added to the original recipe and that could be the missing ingredient, I'm not a fan of MSG, I prefer to go without, but it's another ingredient that may bring it closer to the original. MSG enhances flavours. Cooking it in a pressure cooker will also cook it faster giving you a less dark outer coating the way KFC does it, however I don't recommend it as hot oil under pressure is quite dangerous!!! KFC had special pressure cookers designed specifically for that purpose. That's why it's best to use smaller chickens, as large chickens will need to cook much longer making the outer crust too dark. Either way, home made fried chicken beats any takeout chicken! ENJOY! :)