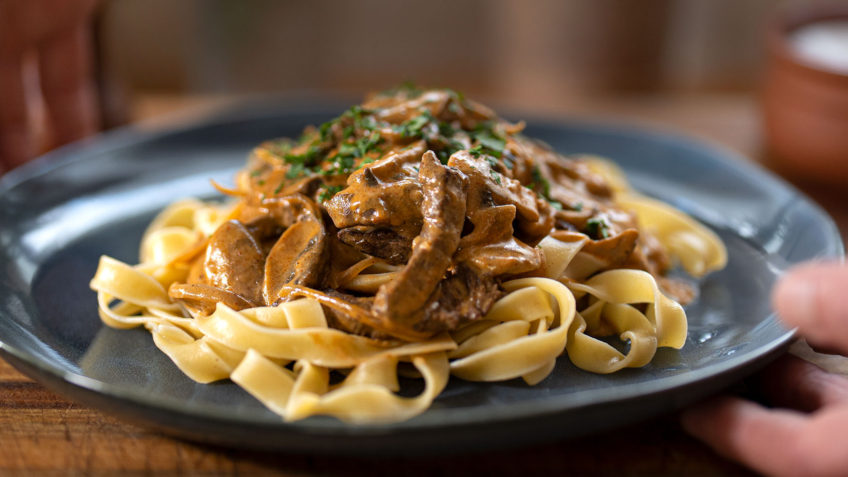 Comfort Food at its Best

Beef Stroganoff is a traditional Russian dish that is made with sautéed pieces of beef, mushrooms, and onions (I prefer shallots) that are cooked in a sour cream-based sauce.

It’s a quick meal and not a long stewed casserole as it appears.  It’s a great way to use up the trimmings of your beef tenderloin.  That’s why many restaurants have it on the menu!

The dish is typically served over a bed of egg noodles or rice, although it can also be served with other types of pasta, such as fettuccine or pappardelle. The dish is known for its rich, creamy texture and the combination of flavours from the beef, mushrooms, and onions.

The origins of Beef Stroganoff can be traced back to the 19th century, when it was said to have been a favourite dish of the Stroganov family, who were prominent merchants and industrialists in Russia. The dish gained popularity in the Soviet Union during the mid-20th century and eventually spread to other parts of the world. Today, it is a popular dish in many countries and can be found on the menus of both traditional and modern restaurants.

Beef Stroganoff can be made with various cuts of beef such as (eye fillet) tenderloin, sirloin, or rump. The key to making a great stroganoff is to use a high-quality cut of beef, brown it well and then cook it until it’s tender. Do not boil the beef by packing too much at once. The sauce is usually made by sautéing onions, mushrooms, and a touch of garlic, then incorporating some flour, beef broth and a splash of sour cream to make a rich and flavourful sauce that’s perfect for coating the beef and pasta. With the right ingredients, beef stroganoff can be a delicious and comforting dish that is perfect for a cosy dinner at home.