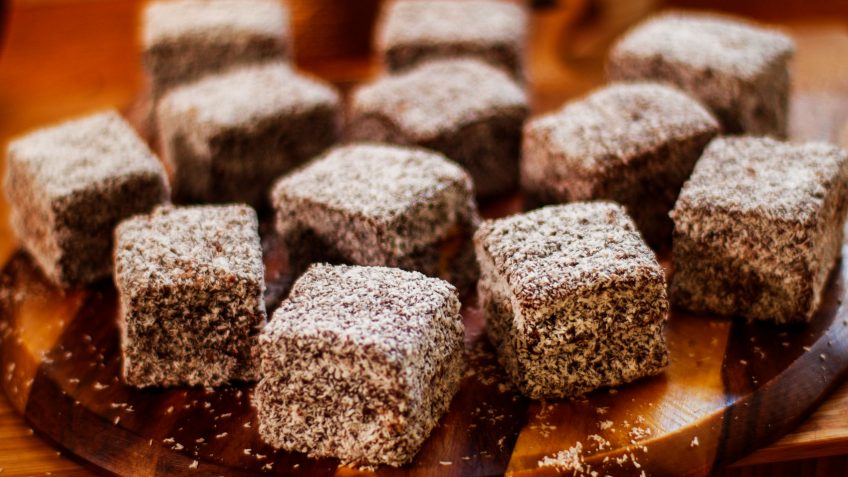 Coated in chocolate and coconut, filled with strawberry jam

Recipe for Australian Lamingtons, a chocolate and coconut coated sponge cake sometimes filled with jam. Named after Lord Lamington, history has it that the sponge cake was accidentally dropped in melted chocolate in the government house kitchen, it was then suggested to coat them in coconut to avoid messy fingers. I’m not sure if it was the maid or the French chef that’s responsible, but it seems that best recipes are always accidental. Now I know a traditional purist at heart will cringe at the thought of putting jam in the middle of an Australian Lamington. But growing up as a kid in Australia, I always remember the good Australian Lamingtons had jam in the centre, and the boring Lamingtons, well they just didn’t have it. Invited at friend’s houses, I always knew who’s mum would have jam, and the ones that didn’t it.  If they had jam, it was a good day. So you guessed right, my recipe has jam between the layers, it may not be as authentic, but that’s how I like them, I promise they taste so much nicer! This delightful treat dipped in chocolate frosting and coated in coconut is a great marriage of flavours.  Enjoy this culinary Aussie icon, the great Australian Lamingtons with jam!

If your frosting is too thick, it will be too hard to coat, add further boiling water one tablespoon at a time. Mix the frosting before each use so it stays smooth, and reheat a little if necessary.